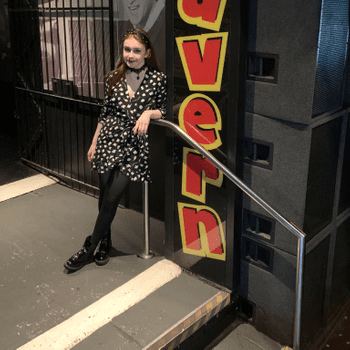 Do you have questions for Lucia Brown?

Log in to ask Lucia Brown questions publicly or anonymously.

Say that you will be on Erasmus in the university for the coming academic year. Say you don’t know anybody in Caceres and ask if he/she could give you some advice about accommodation.

Well, you spent too much time travelling because it was very far from everything. Say that if you could spend that time studying you would be able to get good grades.

Say that’s not far and the climate is much better than in Ireland so you will consider all areas even though you would prefer to live in the city centre.

Liked by Ethan Murphy and 1 other

Based on the tonic chord

Harp glissando on the first beat of every bar

Alternating A and B phrases, each 8 bars in length

Interrupted by cello in bar 10 playing a modal scale (panned)

Syncopated strings punctuate the end of each vocal phrase

Sustained string accompaniment in phrase B

Violin is added in contrary motion to cello

Richer string texture with lower strings added to the accompaniment

Initially based on the tonic chord

Phrase B features no syncopated rhythm this time

Two accented B7 chords answer "how could she do this to me?"

Harp ends on a descending dominant 7th chord (similar to that heard in Sgt. Pepper's)

Similar to chorus one with the following changes

Sixteen bars shorter (omits first A and B phrases)

Phrase A features block chord accompaniment by the harp

Similar to chorus one with the following changes

Ends on a plagal cadence

Liked by Alen Joseph and 7 others

Liked by Elise Casey and 8 others

Liked by Ciara Buckley and 6 others

Liked by Ciara Buckley and 7 others

(Not in the formula book/must be remembered)

Liked by Ciara Buckley and 2 others

Liked by Daniel Paul and 5 others